1 Corinthians 11 has nothing to do with physical head coverings but everything to do with spiritual order in the Corinthian church gathering.  This is bigger than a physical head covering.  Paul is not making a new law as this would be a sin (Deut. 4:2).  He is discussing the disorder of women in the Corinthian church and that the leadership are allowing it (another example, wives 1 Cor. 14:34-35).  To Timothy he adds that he must not allow woman to preach to men (1 Tim. 2:12).  This is in a gathering, not at home or in private.  This is when a woman stands up without being invited by the elders, and starts to pray or prophecy.  The men could do this but not the women.  If she does, she needs to be covered (protected) by the consent of her husband.  Similar Ps. 140:7, God covering/overshadowing David’s head referring to protecting him.

Also, I don’t believe Paul is supporting a tradition or “culture of the day”.  If we applied this “culture of the day” measuring stick to other messages he gave, then we could easily make other things not relevant for today.  It is not only a slippery slope but wrong. 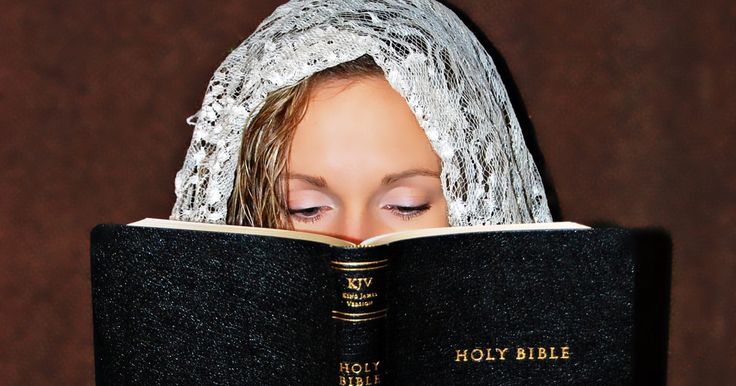 2) Christ is the head of the man (specifically male, husband).

3) Male (husband) is the head of a Female (wife).  Please note, the authority structure is to enable mankind to operate effectively, one is not more important than the other but both are intertwined in the Lord (1 Cor. 11:11).

(1Co 11:4)  Every man praying or prophesying, having his head covered, dishonoureth his head.

When one prophesies it is seldom for self, but for others thus in the gathering.

As per the context in 1 Cor. 11:3, the head is the authority and not the actual head on the shoulders.  Therefore, if we substitute head for Christ and provide the literal translation, it would read: “Every male praying or prophesying, down from having Christ, dishonours that of his Christ.”

In other words, every male (husband) praying or prophesying to God publicly in the gathering doesn’t need consent.  If he looks for consent, then he dishonours Christ.

(1Co 11:5)  But every woman that prayeth or prophesieth with her head uncovered dishonoureth her head: for that is even all one as if she were shaven.

When one prophesies it is seldom for self, but for others thus in the gathering.

Per the context in 1 Cor. 11:3, the head is the authority and not the actual head on the shoulders.  Therefore, if we substitute head for Christ and used the literal translation, it would read: “Now every woman who prays or prophesies not covering up her husband, dishonours her husband.”  For that same one is as if she were shaven.

In other words, every woman (wife) praying or prophesying publicly in the gathering, does not receive consent from her husband, she dishonours her husband.  Similarly in a later message, Paul states that wives are not to interrupt the service to ask questions, but they are to ask their husbands the questions at home (1 Cor. 14:34-35).   She needs to be covered (protected) by the consent of her husband.  Similar Ps. 140:7, God covering/overshadowing David’s head referring to protecting him.

Greek word “covered” (G2619) is a present tense.  If indeed the woman/wife does not have consent from her husband to pray or prophecy publicly in a gathering, let her be punished by cutting her hair short or shaved.  It will be public exposure for her shameful conduct.  To the leaders, Paul is saying that she must make sure that she is covered by her husband, that is, have her husband’s consent to pray or publicly prophecy at the gathering.

Besides submitting to the regular order of a gathering (1 Cor. 14:29), the male (husband) does not need the consent of his wife, or anyone, to pray or prophecy publicly in the gathering.  Needing consent from anyone dishonours Christ, who is his authority.  The woman was made to help her husband (Eph. 5:22).  Therefore “for this reason the woman (wife) has authority by her husband (her head)”.  If not, then the Angels are hindered to help her.  Similarly, the prayers of a husband are hindered if he dishonours his wife (1 Peter 3:7).

Side note: Those words in italics such as “a symbol of ” are not in the original text and have been added by the translators.

Man (Husband) and woman (Wife) are both dependent on each other in the Lord.

Side Note: “Therefore as the church is subject unto Christ, so let the wives be to their own husbands in every thing. Husbands, love your wives, even as Christ also loved the church, and gave himself for it; that he might sanctify and cleanse it with the washing of water by the word, that he might present it to himself a glorious church, not having spot, or wrinkle, or any such thing; but that it should be holy and without blemish. So ought men to love their wives as their own bodies. He that loveth his wife loveth himself” (Eph. 5:24-28).

(1Co 11:13)  Judge in yourselves: is it comely that a woman pray unto God uncovered?

Is it acceptable for a woman/wife to pray in a public gathering without consent from her husband/man (1 Cor. 11:5)?

Paul then uses nature to explain the spiritual concept.  If a man has long hair, it is a shame (tries to look like a woman).  Or if a woman tries to look like a man with shorn hair, it is a shame (1 Cor. 11:6).  Each has their specific roles, but the woman’s long hair is for her benefit, for hair is given as a physical covering and her husband as her spiritual covering (1 Cor. 3-13).

Side Note: If one thought it was a physical covering all along then this would contradict their understanding as the long hair is her covering.

(1Co 11:16)  But if any man seem to be contentious, we have no such custom, neither the churches of God.

We have no custom (tradition) nor in the churches of God, that a wife is over her husband.