LUKE 3:36 CAINAN DISCREPANCY OR NOT 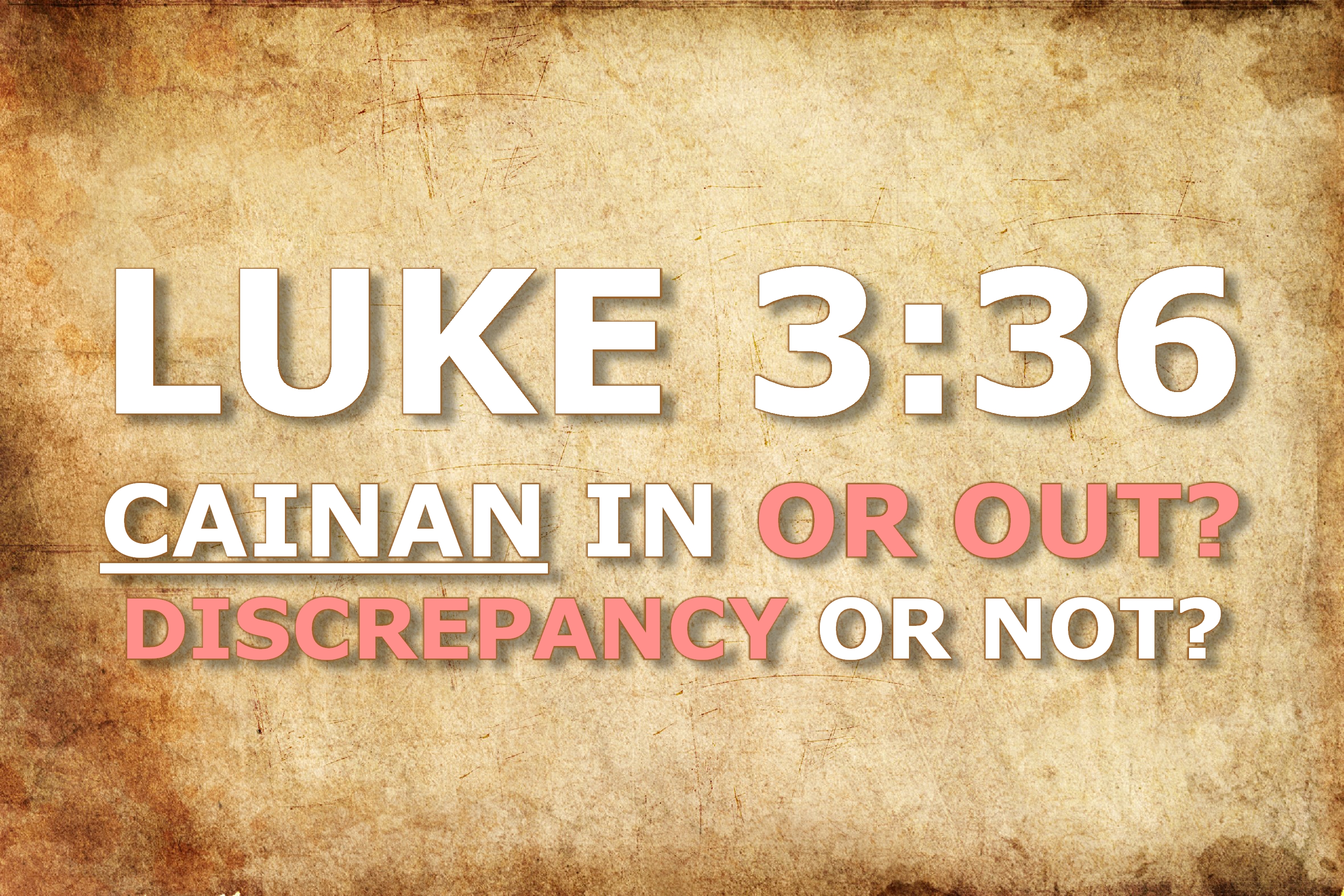 I know the scripture has no contradictions; the only contradiction is in the understanding as all scripture is inspired by God (2 Tim. 3:16).  Could it be that we may not understand the purpose of various genealogies in the scripture and see it as a discrepancy vs. what the genealogy is actually saying as the writer intended?

Also, we believe Yeshua’s words when He says, “Ask, and it will be given to you; seek, and you will find; knock, and it will be opened to you” (Matt. 7:7).  If someone asks but doesn't seek, will they find? If they seek and don’t continually knock, will it be opened?  Here is a result of asking, seeking and knocking.

WHICH ANCIENT MANUSCRIPTS IS CAINAN IN? WHAT IS THEIR RELIABILITY?

Which ancient New Testament manuscripts is Cainan mentioned in; and what are the estimated dates of existing copies?

Which ancient Old Testament manuscripts is Cainan mentioned in: and what are the estimated dates of existing copies?

The Septuagint (LXX), was translated into Greek by 70-72 transcribers for Ptolemy II Philadelphus, King of Egypt, (potentially an agnostic), for his Alexandria Library.  They were focused on the historical aspects and could have added Cainan to the Hebrew Text.  The Book of Jubilees, which was found amongst the Dead Sea Scrolls provided this history, (it predates the circulation of the NT books), and gives valuable insight into Cainan.

Book of Jubilees - R.H. Charles (Chapter 8:1-7), “In the twenty-ninth jubilee, in the first week, in the beginning thereof Arpachshad took to himself a wife and her name was Râsû’ĕjâ, [the daughter of Sûsân,] the daughter of Elam, and she bare him a son in the third year in this week, and he called his name Kâinâm. 2. And the son grew, and his father taught him writing, and he went to seek for himself a place where he might seize for himself a city.

3. And he found a writing which former (generations) had carved on the rock, and he read what was thereon, and he transcribed it and sinned owing to it; for it contained the teaching of the Watchers in accordance with which they used to observe the omens of the sun and moon and stars in all the signs of heaven. 4. And he wrote it down and said nothing regarding it; for he was afraid to speak to Noah about it lest he should be angry with him on account of it. 5. And in the thirtieth jubilee, in the second week, in the first year thereof, he took to himself a wife, and her name was Mêlkâ, the daughter of Madai, the son of Japheth, and in the fourth year he begat a son, and called his name Shelah; for he said: "Truly I have been sent."

6. [And in the fourth year he was born], and Shelah grew up and took to himself a wife, and her name was Mû’ak, the daughter of Kêsêd, his father's brother, in the one and thirtieth jubilee, in the fifth week, in the first year thereof. 7. And she bare him a son in the fifth year thereof, and he called his name Eber: and he took unto himself a wife, and her name was ’Azûrâd the daughter of Nêbrôd, in the thirty-second jubilee, in the seventh week, in the third year thereof.

WHY IS CAINAN IN LUKE AND NOT IN GENESIS?

From a historical perspective, Arphaxad did have Cainan as his son.  The Book of Jubilees in the Dead Sea Scrolls, which predates circulation of the NT, has Cainan listed in the genealogy, as well as both the Septuagint and the book of Luke.  Moses, under the direction of God, blotted out his name from the genealogy of mankind most likely because Cainan had been tainted with Angelic seed or practices.  This also impacted Ezra who also left his name out in the book of Chronicles. Thus, all of the Hebrew texts and those from Hebrew such as the Targum, excluded Cainan, except for Jubilees as it was providing a history.  Cainan’s sin was most likely idolatry, based on what he did, and he may have followed the teachings of the watchers which he had translated.  He probably had a child, Sala, very early (the main objective of the watchers was to pollute the seed of mankind).

Arphaxad probably raised Sala as his own and it is also true that he begot him through Cainan, just like Levi was in the loins of his great grandfather Abraham (Heb. 7:5).  35 years from Arphaxad to Sala as per the scripture is possible, as Cainan probably had Sala at a very young age.  Obviously, Cainan’s sin did not impact his son, but only himself.

Luke included Cainan in order to show the full history, whereas Moses showed only those who were pure mankind from Adam.  The historical list reveals 77 people from Adam to Yeshua.

Side Note: Other genealogies which do not match can also be found in Matthew 1:8-9. Matthew removes Ahaziah, Joash, and Amaziah from the genealogy because these men were idolaters (probably the worst kind) and Matthew was showing the 14 good generations from Abraham to David, David to Babylon and Babylon to Christ (Matt. 1:17).