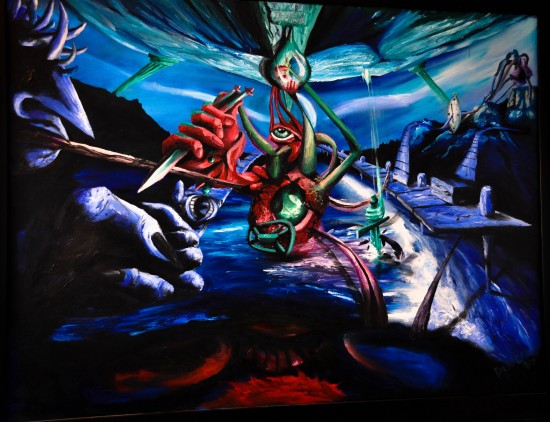 God the Father (the index finger) created all through the Word/His Son (the cross) and gives life through Holy Spirit (the hovering cloud). He also created a way for the Physical and Spiritual world to co-exist in parallel, influencing each other.  He established natural and spiritual laws and principles to live by (the columns holding up the earth from top down).  He gave mankind freewill, personal choice, which is the only thing mankind really owns.  The ultimate personal choice that really counts is - do they want to be subjected to God (humbling themselves under God, heart in the lowest point, the water) or be subjected to themselves (exalting themselves as their own authority, heart on the mountain).  He gave mankind this choice but this choice has a time limit on it (the clock) - when they die their choice is up and the results of their choice have an eternal consequence.  If they decide they want to be subjected to God now, while they have this choice, they will spend eternity with Him (Heaven then on the new earth) or if not, they will be in an environment separate from Him (at the bottom - Sheol "Hades left, Death right" for a few thousand years and then at the end, Judgement day some will be thrown into the lake of fire "Hell" for eternity).  If they believe in Him now when they don't even see Him how much more when they do.  Is there any better filter, testing mankind for eternal life?  If He showed Himself now then they no longer have the option to repent, time is up because they will know Him. Like the Angels, those who rebelled against God can’t repent because they did it knowingly.  The fallen Angels that are locked up for sleeping with mankind are in Tartarus (Jail above lake of fire), many of the demons were cast into the Abyss before Adam and Eve came onto the scene (Abyss is above the Jail).

For freewill to exist in the physical and spiritual world, mankind needed an environment separate from God.  If those who choose not to be subjected to Him could actually experience the consequences of that decision, this environment is called evil.  Lucifer (the Devil), one of the highest-ranking Angels rebelled against God, influences and rules in and through this environment (Devil with 7 horns - 6 evil world empires that existed from the beginning and 1 still to come).  For those who want to be with God, God gave them inner access to Him where they call upon Him as Father.  This access is only possible if they come to Him through His Son.  God also gave outer access to those through fear of Him by following the law – which is an impossible road to follow and even if followed to the letter, they still don’t have inner access.  So when they die they go to a place in Sheol called Death and remain there until judgment day where they will be judged on their works.  They too will need to accept Jesus Christ as their LORD, Owner. God not only gave choice but gave them the authority over the earth to exercise that choice.  Therefore He will hold them accountable.  Because of rebelling against God mankind was blinded and thus influenced by the Devil.  God had to send His son to the earth in order to legally intervene by being the son of Man.  Now He is able to step into the evil environment and help people back to Him by cleansing them with His life, blood of His Son is life (Green Blood Droplet).

Those of the world live their life focused on the now only, limited to their finite life on earth and never plan for eternity (the heart's arteries top right flowing through the clock).  They gather and heap up, and success is measured by those who have the most or by others saying they are successful, but this is a never-ending downward spiral.  They are governed by the world's thinking, and believe all roads lead to God, or as long as you believe in something that is good, even if you don't believe that is good too (they are deceived, all the roads lead to a common boardwalk that leads directly to the Devil.  Those of the world can see it if they really seek it out).  Those that are on this boardwalk, even though they may have everything from a world standard, they are starving for life (mouth in the boardwalk gapping for food).  They either don't know they are starving for life, Jesus Christ, and find other pseudo-fulfilments, or they know Him and don't want Him (mouth on the boardwalk eating the green grapes God has made available through the gospel).  The Gospel is simple (Green grapes are small enough that they are easy to swallow) yet there are 3 typical responses from the world: 1) Acknowledge the source of Life, give their life to Christ and become a branch the Lord uses to help people (Red Heart).  2) Acknowledge those that give, the branches, they eat from the tree without giving their life to the One who is sustaining them, living off the benefits without giving credit to the true Giver (they continue to eat and decide to stay on the boardwalk – best of both world’s but when they die they go continue on the boardwalk into the hand of the Devil). 3) Those who eat of the benefits but don’t give credit to the Source of Life or the branches but give themselves the credit for the wisdom they possess (Parasites and don’t know they are, the heart on the mountain who is sustained by God yet they still believe it is themselves).

After Jesus Christ was resurrected, Holy Spirit came to offset this imbalance and He too influences mankind to come to the light, Jesus Christ (cloud hovering under the cross but over mankind - influencing them from outside to inside of the heart - visual experiences).

When they confess and believe that Jesus Christ is their LORD, Owner (heart that steps off the boardwalk into the water and hand reaching out to the Green Blood Droplet on the cross), then  Holy Spirit dwells inside them (Green life of Christ flows through the arteries to the inside of the heart from the drop of water). Christians are the branches but it is Christ that is the true life inside them. Sometimes the Christians heart’s become hard towards God, not because of Christ but because of their choice.  A Christian is softer towards God than a heart from those of the world (red heart vs. the purple heart).
But for true power to come through the life of a Christian, Christ needs to flow through them unhampered (Heart to be Green like the spirit, Heart more green in the soul the greater the power in Christian’s life is released). The Devil's focus is to keep people away from God (his Eye is red because his focus is on the souls of mankind, bringing them down with him).  Christian's focus is on their Heavenly Father because Jesus’ life in them (Green eye focused on the finger through the blood droplet.  It is the Blood of Christ that gives them life to see life).

4 ways to get clean so the anointing/power of Christ flows out of a Christian:
His Righteousness
1) Intimacy with God as Father, they reach out to God through Praise/Worship/Praying/Fasting and studying His Word (3 arteries converge at the Blood of Jesus Christ and becomes a finger that touches God’s finger only in the Blood of Christ).  As Christian touches the Father, it is His presence that purges them clean (Artery entering the soul and emitting green life).  The more intimacy with God, the less Christian remains and more of God flowing through their soul. This is God’s faith active in them.

3) Stay connected to Jesus by surrendering to Him, He is the Owner (green eyes – focused on Jesus Christ, the source of the green life).  How? By eating His flesh – Doing what He told them to do with what they have been given (Steering wheel directing Christian’s spirit). And drinking His Blood – Repenting and leveraging that access Christ has given them to do His commission (Christian’s hand touching the Water droplet on the cross).

4) As Christian steps out to do God’s Will, power/anointing flows out from their spirit from Holy Spirit to impact the situation (the green life that is in their spirit flows out and onto the hand that operates through the word of God).  This power comes out and impacts those around.  Gives food to those who are hungry, gives hope to those who have none, all in the name of Christian’s master, Jesus Christ (green grapes coming from Christian’s hand).  The power also breaks the bounds of wickedness in the life of self and others (the word of God converting into a sword through the hand of Christian which is about to cut the black artery “strong-hold” of the Devil).
There are times that Christian is unaware of illegal demonic spiritual attacks that come out of nowhere where the Angels of God are sent to intervene on Christian’s behalf (Sword coming down from the finger of God to destroy the attack coming from the sea, the path the Christian is traveling on and where they least expect it).

Christian’s words and actions are released from his soul (hand coming out of the lips on the heart).  The stabilizer for Christian releasing the authority is God’s Word (thumb on the Scrolls, pointing up to Cross), the actions are always done based on Love of God first (index finger – same as the Father’s finger) and Love of others second (Middle finger) to give hope (wedding finger) and wisdom to a dying world (baby finger – able to get into the ear). (The middle finger bent down to its “subset” 3rd and 4th finger), The Christian is a channel through which Jesus Christ gives to those in the world - food (green grapes) and a sword (sword) (The scroll through the hand produces green grapes and sword).